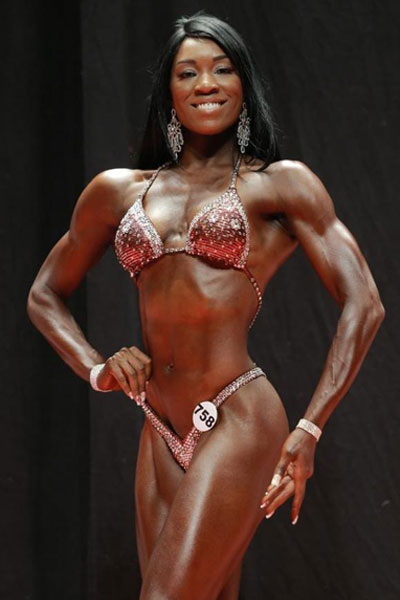 ArianElizabeth, an IFBB Figure Pro as of 2013, is originally from Indianapolis, Indiana but immediately left for California after graduating from Ball State University with a double major in Apparel Design and Business Management. She immediately entered the fashion industry as a fashion designer, dance/runway choreographer and runway model. Due to her naturally athletic build, she would eventually transfer over to fitness modeling where it proved to be more lucrative to her career.
Being a tomboy was unavoidable as she was born into a male dominant family. With no sisters, no aunts and no female cousins within 1,000 miles of her, she was forced to turn her Barbies into the enemy against her brothers army men! Flipping on old mattresses, boxing in the front yard, creating and trying out makeshift bike ramps, tackle football in the street and impromptu wrestling with anybody who decided they wanted to get down on the spot, was a day in the life of her childhood.
It’s no surprise that ArianElizabeth played Varsity Volleyball and Track but the Junior High and High School she attended were Schools For The Performing Arts where she would receive seven years of classical ballet, modern and jazz dance training; she continues to dance today.
ArianElizabeth was introduced to the world of Bodybuilding by a competitor who noticed her potential while working out at the gym. He suggested she look into the sport and she has been looking into it ever since. She’s always been into weightlifting so she had no problems in that area but posing, now that was another beast! As a competitor at heart, she knew right away she wanted to go pro so she looked up every YouTube video she could find of the Figure Pro’s competing and tried to mimic what they did on stage. She would have her friends photograph her while she posed and then lay her photos next to the Pro’s in a lineup to see how she looked next to them and see how to change her own posing to look more like theirs.
Her very first two shows that she ever competed in with the NPC, she won her class and the Overall. Ecstatic about her progress, she immediately competed in the USA’s where she would place 8th. Convinced she would need help, she was then introduced to TeamN10sity! They immediately changed her diet, suggested a training program to make her more symmetrical, polished up her posing and gave her the team support she needed to get back on stage. She requalified for the USA’s again by winning her class at the California Championships and then went on to take Second Place in the NPC USA Championships earning her Pro Card!
Currently, ArianElizabeth is a Regional Coach with TeamN10sity assisting fellow Figure Competitors with their contest prep and posing techniques. She is also currently gearing up to make her Pro Debut in 2015! Training harder than ever, she’s working to bring her absolute best package to the stage yet! As a believer, she’s always said, “I can do all things through Christ who strengthens me!”. With the favor of Christ, her TeamN10sity Coaches and team and HARDWORK & DEDICATION, she’s got the recipe for success!!